The town was nearly deserted – its few hundred residents away at school, work, or shopping in a distant village. Besides a small grocer, bakery, bank, butcher, pizzeria, art studios, tourist office, post office, hotel, church, museum, and a restaurant, the other buildings were ancient stone dwellings built along the street. In places it was difficult to discern whether the streets curved around the houses, or they were built to obtain every inch of space available, even if that meant a concave wall that cars raced by.

Of course, there were no cars racing by when these buildings were erected. Their gray and white exteriors were broken only by the ubiquitous flower pots of geraniums and the occasional green inner courtyard abundant with vegetation. Our footsteps echoed between the empty structures. There were no squealing children, moving vehicles, barking dogs or hum of air conditioning. Quiet, beyond soundlessness. A city whose occupants were gone for the day.

Suddenly, a high pitched roar splintered the silence. Something was headed for us, something large and heavy. We pushed ourselves into the exterior rock walls as a giant set of tires careened past us at eye level. Claws dangled from the undercarriage and way up above our heads, in enclosed capsules, were steering wheels, gear boxes and actual humans at the helm. These were the strangest machines I had ever seen. They looked like they belonged to aliens – something used for travel along the moon’s surface. Another one whirred by. Intrigued, I set out to discover what they were. It didn’t take long. They were returning to an equipment barn near the hotel I was staying in.

Perched on a hilltop, the adjacent spot of Renoir’s ‘Path through tall Grass’ inspiration, overlooking the green Ource Valley split by the Ource River that joined forces with the Seine a little further west, the Hotel des Canotiers was the only spot for lodging. And from its French windows that opened to reveal the view, I could see acres and acres of vineyards.

In fact, the outlying golden hills of Essoyes seemed to be the gardening spot for champagneries in and around the area. The very vines I touched, meandered through, plucked a grape from, were the ones that could take sunlight and water and sustenance from the soil and bear the little clusters that would end up in our flutes, dancing with air bubbles and secret truth about the conjoined vintages that it took to make such a beverage.

And these vines needed aerating and spraying. Sitting high above the grapevines, these men drove their ‘tractors’ to sites all along the champagne region and leased themselves to the growers. Home only for the night, as before sunrise I could hear their strange moan as they rolled along to yet another vineyard.

I was never quick enough with my camera to get a picture of these giant machines, but assumed I could find something similar here as our region has become quite prominent in viticulture. But sadly, I could not. This sprayer from John Deere was the closest thing I have seen so far. 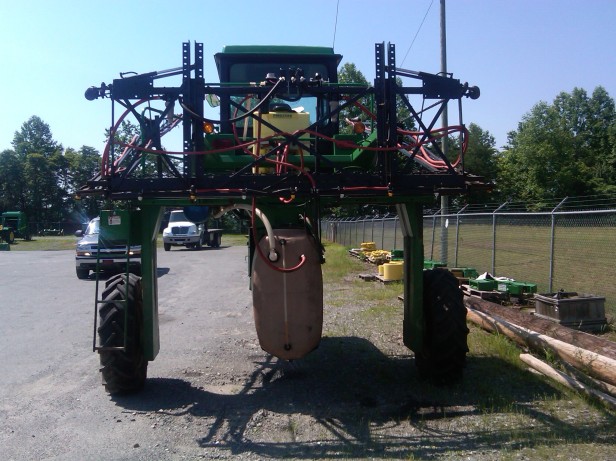 closest thing I could find in America

3 thoughts on “Essoyes and the Giant Machines”