On the Bland, Virginia property is an old house made entirely of American Chestnut, probably from the very trees that grew so thickly in the area. Old deeds list certain ancient Chestnut trees as the boundary lines. That was before the blight killed off all the chestnuts in the early 1900’s.

This old house is an amazing throw back to the days when people used large flat rocks as the foundation and planed logs by hand. Built to last, it still stands as a reminder of the builder’s skill. Even the rafters are chestnut, perfectly hued through time and as sturdy as the day they were placed there to be the home of a family, a gathering place, a dwelling. No one has lived there in years. Yet the old wood stoves still stand, rusting quietly in their footprints. One says ‘Kenmore’, another says ‘Warm Morning’. I have never lived with or around wood stoves, not even at grandparents’ houses, so I have no association with that meaning except to know that they are old.

Standing inside is like being within a mausoleum. Ghosts could be just around a corner, maybe calling out from the back of the house. Leaves flutter, rustling in the breeze. Broken window panes have allowed a collection of leaves to float in, ones from the giant maples on either side of the house.

It has possibility as a guest house or dining hall for larger parties than our cabin will permit, but we aren’t sure we have the time or the money to commit to its reconstruction.

In the meantime, it occupies prime real estate on the property. Close to power and water, it would be the ideal location for a barn. But that would mean tearing down the house. We could sell the chestnut wood – its very highly prized – but is that the right thing to do with the last chestnut surviving on the property?

When we have an answer, I’ll post it. Until then, we are open to suggestions and comments. What would you do with an old chestnut house? 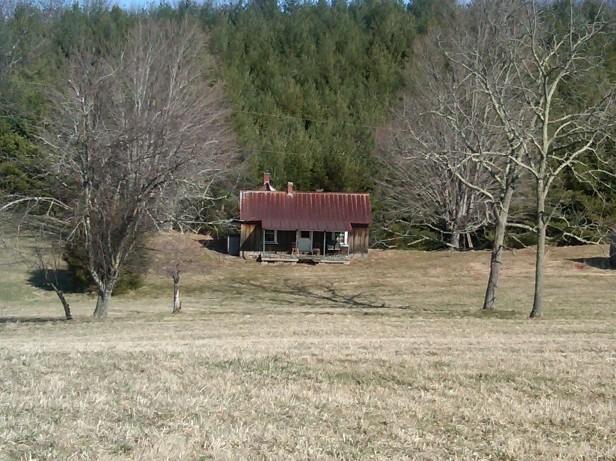