Bourbon – a fine corn whiskey – has its roots in bluegrass country. Oddly enough, it is credited to Reverend Elijah Craig, a baptist minister who honed the whiskey made from other grains into what we know today. Corn was plentiful in the 1700’s, as settlers were encouraged to accept land for the purpose of farming it.

This bourbon was soon used to make mint juleps and now it is the traditional beverage of the Kentucky Derby. You can find all kinds of complicated recipes for this drink, but keep it simple.

Fresh mint is widely available now so avoid all of the mint infusions and mint syrups,( although it is easy to make your own). Just muddle a few leaves in the glass – traditionally a chilled silver cup, but who has silver cups these days – add ice, 1 ounce simple syrup and 2 ounces Kentucky bourbon. Stir together, leaving the leaves in the bottom of the glass – mojito style. (Mojito is considered the Cuban cousin of the mint julep – using rum instead of bourbon, club soda, and an additional hit of lime juice which the julep doesn’t have.)

Making simple syrup is – well – simple. Just add 1 cup sugar to 1/2 cup water – bring to a boil, stirring until the sugar dissolves, then cool. You can add the mint to the mixture – a large handful, and strain the syrup after it boils. This makes a mint flavored simple syrup and removes the need to muddle the leaves in the individual glasses.

If you like fizzy drinks, add a splash of club soda. But be sure to add a sprig of mint to the finished drink for decoration. This drink is refreshing – not too sweet – clean on the palette with the almost smoky bourbon mixed with the verdant mint. I think you’ll like it. Don your best hat, grab a julep and join me in pre-race festivities! 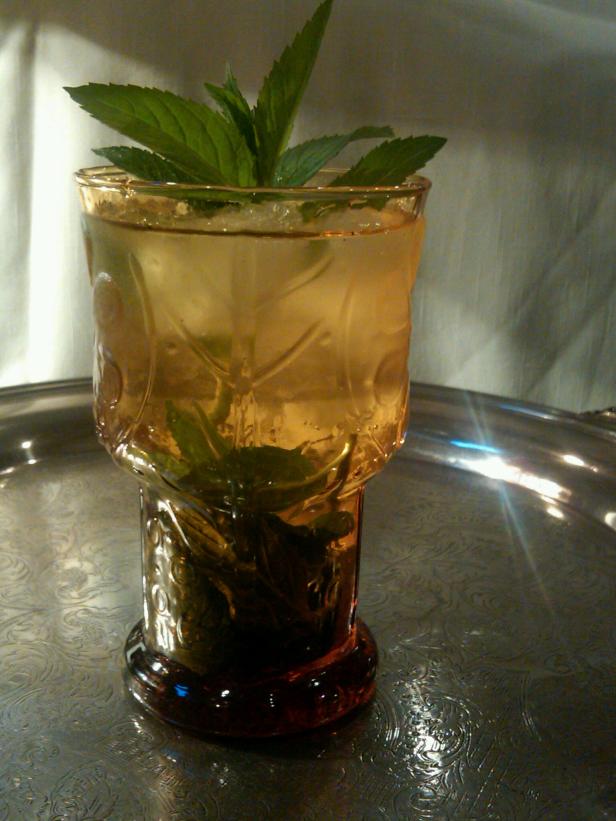 4 thoughts on “Mint Julep and Its Origins”