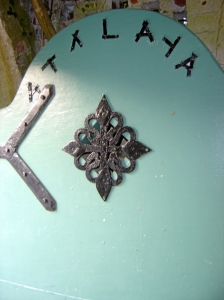 Enter here, my friends, right through the door of the imaginations of a pair of artists and art historians, Archer and Anna Huntington.  Located inside of Huntington Beach State Park, in South Carolina, it is a great place to spend some time when visiting the Myrtle Beach area.

Many who see this structure mistake it for a fort as it has sturdy masonry walls.  And a large tower that held 3,000 gallons of water is actually where it gets its name.  Atalaya is Spanish for ‘watch tower’.

I find a lot of inspiration here.  It was built in the thirties at a time when much of the country was suffering from the Great Depression.  Many locals were hired to work at Atalaya and their families were sustained through the building of it.  And they most likely had never seen a structure like this before as it was planned by Archer Huntington in the style of those he had seen in his travels along the Andalusian coast.

In the forties, during World War II, it was occupied by the United States Army Air Corps from the Myrtle Beach Air Field in order to patrol the beaches.  The grounds were covered with artillery and machine guns.  This temporarily ended the Hunington’s annual winter stays – the main reason they wanted to have a home in the south.  The harsh northern winters were too hard on them.  They returned in 1946, and 1947 was their last year at Atalaya as their health and age bore upon them.  Archer Huntington died in 1955 and Anna had all of the furnishings shipped to their home in Connecticut.

There is a gorgeous courtyard inside the inner walls of Atalaya.  It isn’t hard to imagine sitting inside them, safe and protected from the wind off of the dunes.

“The devout have laid out gardens in the desert.” – Robert Duncan

Inside the walls were the pens where the animals were kept that she sculpted – horses, dogs, bears.  Much of the sculpture at Brookgreen Gardens was that of Anna Hyatt Huntington.  And just beyond the house lies the Atlantic Ocean. 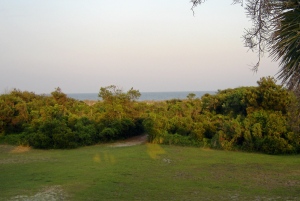 In a brief few minutes, you can walk along the trail and end up at a secluded beach.

And when you head back up the trail, this is the beautiful view of the house.

Well, minus my husband normally.  Isn’t he looking spiffy in his bright shirt though?

And there are lots of nice things about Atalaya, one of which is the annual Arts and Crafts Festival.  This year it will be held September 28 – 30.  Admission is just a few dollars per day and you can see all kinds of artisans and their works from basketry, clay and porcelain, oil and acrylic paintings, metal works, woodworking, jewelry making, glass, and photography.  For more information about that just click on the link below.

44 thoughts on “Atalaya Castle and Arts and Crafts Festival”