Grief does things to you – to your mind, to your body, to your soul.

Some people talk these things through.  After my mother died, I found it difficult to talk for the first time in my life.

I must have turned the pain inward and the result is a ‘sprained’ or ‘torn’ MCL and hamstring.  There’s really no other explanation except the one we have been reaching for – one overcompensating for the other.  I wasn’t even moving when the hamstring separated.

My sister and I had been working at Mother’s house every Saturday since she passed away.  There were documents to find, bills to pay, accounts to cancel.  We made a list of those things which had to be done during normal weekday hours and met after work when we had short days.

Last Saturday, after finally summoning the courage to take down her Christmas tree, I was standing at the kitchen bar in my mother’s house dividing pictures of my childhood with my sister.

“Here, you are holding her hand in this one.  You should keep it.”

“And this one has Daddy crouched down, smiling at you as if he adored you more than anything in the world.  You take that one.”

“This is Mother in her prom dress; and over there is the one in her cap and gown.” 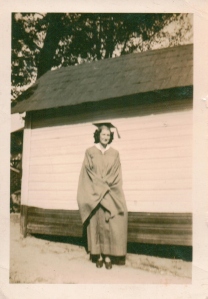 The inside of my knee had been ‘sore’ for a while.  I simply got a little elasticized knee brace and went on about my life.  I knew it had been swelling from time to time because there were often the waffle-like imprints of the fabric on my knee when I took it off.  Ibuprofen before bed and first thing in the morning seemed to ease it.

But on this day, it was really starting to throb.

“Why are we squinting in every picture?”

“They always made us face the sun!”

“And the old brownie camera…”

“Still intact with the flash…”

“Is in the treasures drawer.”

We were suddenly finishing each other’s sentences.  The things we only had one of were being stored in a place we referred to as the ‘treasures drawer.’

Our plan was to get to that ‘drawer’ by afternoon.  We would each get half of the treasures, which meant we would also be giving up half of them as well.

These aren’t the things you might imagine.  There was nothing inside a thief would want.  But they were bits and pieces of our childhood; family Bible, the clock radio which had belonged to our grandparents, the old Brownie camera, the surgical bowl and sutures removal set the doctor gave our father after his second painful surgery.  You get the picture.

Priceless to us, valueless to others.

I pointed at a picture.  “There’s Daddy and the bear!” 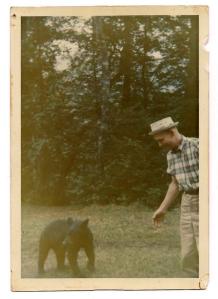 It was faded from all of the years it had hung on the wall.  He must have made it face the sun as well, content to see the reflection of it across his brave face as he reached out to pet the wild bear during one of our many trips to the Smoky Mountains.

Pressure built for a second behind my knee and then it released, as if the entire muscular structure in the crease of the knee turned loose.  It didn’t hurt at first.  It took about a minute – maybe two – before the pain shot through my knee.

A few minutes later I reached for my purse and yanked out the brace, pulling it on.  I followed it with some Ibuprofen and suggested we sit while we combed through recipe books.

We made piles and I kept forgetting which pile was mine and which needed going through.  My leg throbbed, but we had so much to do.

The next morning my husband drove me to Urgent Care as soon as they opened.  I left with crutches, leg stabilizer, anti-inflammatories, and a recommendation for orthopedic attention.

Medical professionals at every level kept asking how I had injured my knee.  Did I fall?  Did I feel it pop?  Was there a noise when it ruptured?

It just turned loose.  I knew no other way to explain it.  I was standing at the bar, not even moving, and it turned loose, as though the tight muscular band around my knee lost all of its elastic.

Even my orthopedic specialist jokingly laughed, saying I needed a better story.  You’d think I could come up with one wouldn’t you?

But I like this doctor.  He has confidence in my ability to heal without surgery.  He also has a few tricks up his sleeve, he said with a wink, should they become necessary.

On the bright side, my bone structure looks good – no arthritis and it is still stable.  I’ve been prescribed rest.  The old knee needs time to calm down; for the swelling to subside.

The heart needs time to heal as well.  Maybe one will aid the other and I’ll come back on the other side of this as a whole person again.

Fingers crossed – but not ankles.  That hurts my knee.

43 thoughts on “What Grief Can Do”