There is one person in my life for whom the movie ‘The Sound of Music’ will forever be conjoined in my mind and heart. My father’s sister and the aunt I have alluded to before – Aunt Millie – loved this movie. It was her favorite and she gave me the album of its soundtrack.

But I suddenly realized today that we sort of lived like the Von Trapps when we were at my grandparents house. When my aunt came in for a visit, she stayed in her old room upstairs at their house. My sister, two female cousins, and three male cousins – yes that makes seven of us – would all end up at the grandparent’s house sans the parents.

Now would be the time to mention that the grandparents, for all of their lovely attributes, were not kid friendly. By that I mean they were neat-niks and even a cookie had to be consumed over the sink to avoid spilling crumbs onto the floor. My grandfather lined a row of rugs across the front porch and if he did not personally see our feet hit each one, we had to go back and do it again before we were allowed entrance into the house. The road to their house was dirt at that time and he wished to avoid any being carried inside by eager children.

So, it isn’t altogether abstract that he fit the role of the ‘captain’ in the movie.

Grandma was the equivalent of the Reverend Mother with her poetic renderings of spiritual or inspirational musings. She often wrote for local ministers.

Maria who brings magic into the lives of the children, was our Aunt Millie at that time in our young lives. And yes we ran and played and sang and shopped and took long forest walks and listened to her stories. Most likely she understood the importance of keeping us out of our grandparents’ way and thoroughly entertained so that we didn’t notice we were being diverted. And at the defense of the grandparents, seven children would be a lot for two older people to handle, especially since grandpa had a heart condition and grandma had rhumatoid arthritis – feet and hands gnarled from its ravages.

So Aunt Millie took us on adventures, brought us gifts from her far-away home in Virginia, and was the pied piper to us inquisitive kids. I suppose we appeared like the Von Trapp children with Maria as they canoed up to the wandering father and capsized the boat. Loud – mischievous – until grandpa came out. He didn’t have a whistle, none was required. But he knew how to get our attention.

Aunt Millie could get our attention over dinner and smile or wink, communicating a shared secret of the day’s events. She often ate at our table – the one set up for the youngsters, away from the adults. I guess they were from the generation of believing that children should be seen but not heard.

Aunt Millie never married, so I suppose she felt a little out of place with the pairs of adults spaced about the adult table. And I guess that’s where the analogy to Maria ends – although she had many offers of marriage from various men throughout her life – Aunt Millie never accepted any of them. She enjoyed her independence and a life free from constraint.

But she also enjoyed ‘The Sound of Music’ and made sure that all of us did as well! 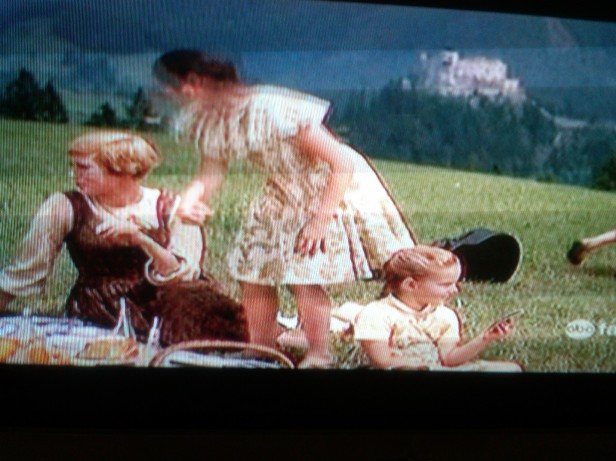