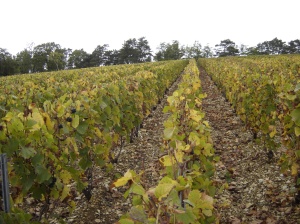 Recently I was doing a little research on the difficulty of maintaining a proper vineyard in a warm temperate climate. The wineries I have toured in the past on the coasts of North Carolina and South Carolina have been shipping in grapes from my hometown in the foothills of North Carolina known as the Yadkin Valley Region. Our area is purported to be ideal for the growing of grapes – often compared with Napa Valley – as it has warm summer days with cool breezy nights and lots of freezing temperatures in the winter. They have to struggle to survive unlike at the coast where they succumb to disease, too much humidity, too little root development, and lack of going dormant as they do in cold weather.

Struggling is good for the grapevine. It sends down deep roots where it can receive nourishment during a drought, thusly, they are not too close to the surface and succeptible to root rot during heavy rains or flooding. These same long roots keep it bolted into the earth when the harsh winds blow, and losing its leaves in winter prevents disease. Yes, struggling serves the grapevine well.

While I was working on this, my friend Jess over at A Winsome Journey was working on a piece about struggling as well. Titled The Outsider, it recounts a bit of her struggles during her formative years and the strength that she too received from it. I love her positive attitude and the gifts that she understands are hers because of the trials.

My son was blessed with many talents that served him well in sports – at least many of them and most notably the ones of baseball and football. He decided to try basketball one year – never his particular favorite. Unlike other sports, he didn’t excel at this one. In fact, he didn’t enjoy it very much and only stayed with it due to his belief in honoring his committment. He also wasn’t the star player and often sat on the bench – not something he was used to. He struggled. I personally thought he learned more from that season than any other. It served him.

-Once all struggle is grasped, miracles are possible. – Mao Tse-Tung

On the traveling baseball team that he later played on during the summer months, he had a great coach. He called them together and asked each one individually which part of their workout they liked best and which part least. Then he gave them double workouts on the things they liked least and halved the ones they liked best. For my son, that meant he did more running. He despised running as exercise – during a game it was exhilarating – but to just run for the sake of running was not perceived as fun by him. (He probably gets that from me.) The reason why his coach did this was due to the struggle. He thought they were naturally drawn to the things that were easiest for them and repelled those that were hardest – the very thing each one needed most to be the strongest athlete they could be. They needed to struggle in order to be strong.

-Strength does not come from winning. Your struggles develop your strengths. – Governor Arnold Schwarzeneggar

There are times, especially when we are young, that struggling doesn’t seem right or fair or pleasant. We look around and see others having it easy and are envious of their lives free of the battles we face. Then the storms rage and they have no anchor. Little trials tear them apart. They are not strong like us. They didn’t have to develop deep roots or learn how to survive adrift. Things that roll off of our thick skins, penetrate into their core. Then we see the truth of it. They were not the ones who were blessed – we were.

We should pity them. And we should see the gift of struggling.

-Education comes from within; you get it by struggle and effort and thought. -Napoleon Hill

The word serendipity is described as making desirable discoveries by accident or having good fortune or luck. I find there is much serendipity in my life lately, not the least of which is the discovery of another great blogger and our coincidental concepts of struggle.

-Always remember that striving and struggle precede success, even in the dictionary. – Sarah Ban Breathnach

42 thoughts on “The Serendipity of Struggle”