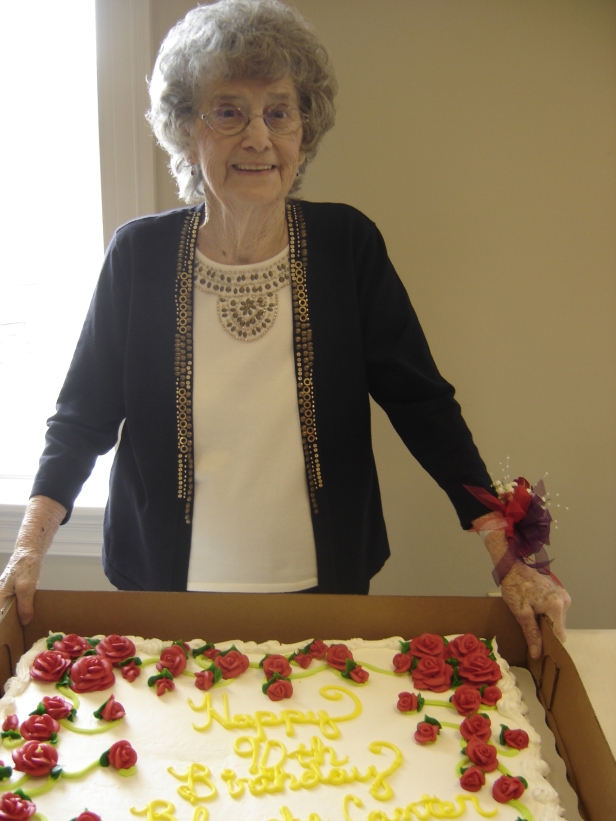 So many of you have sent such good thoughts and wishes concerning my mother that I thought you would like to know that she is up and celebrating her 90th birthday.

This is her with her cake and first ever wrist corsage.  We threw a party for her at the church’s fellowship hall and so many of her family, friends, neighbors, church members and acquaintances stopped in that we have determined she must certainly be well loved.

And once or twice she even forgot about having a walker and took off without it – both excting and scary.

She enjoyed herself and that made the days of working on the event – dragging new clothes to her house for her to try on there, ordering flowers and linens and food, sorting through photos for the memory table, agreeing and disagreeing with other family members over the details, working on invitations, making phone calls, cleaning and boxing and taking pictures – all worth the effort.

This happened yesterday on Groundhog Day, which is her actual birthday.  And for as long as I can remember she has been the recipient of every possible joke concerning the furry creature’s prediction for spring.

For those of you who aren’t familiar with the Groundhog Day tradition, let me enlighten you.  On February 2, groundhogs around America crawl out of their burrows – how they know that it is February 2 is beyond me – and if they see their shadows, they will retreat back into their little nests to rest for six more weeks of winter.  If they do not see their shadow, then it will be an early spring and they will stay out to play.

This goes back to the ancient European traditions around Candlemas and the importance of marking the mid point of winter.  Believe it or not, the stately groundhog even has his own website which has some old rhymes there, such as:

According to an old English song:

If Candlemas be fair and bright,

Come, Winter, have another flight;

If Candlemas brings clouds and rain,

Go Winter, and come not again.

According to an old Scotch couplet:

If Candlemas Day is bright and clear, There’ll be twa (two) winters in the year.

Another variation of the Scottish rhyme:

If Candlemas day be dry and fair,

The half o’ winter to come and mair,

If Candlemas day be wet and foul,

The half of winter’s gone at Yule