Yesterday, after the fog lifted, we pulled out the large charcoal cooker to see if was still in good condition. Luckily, it was. I had hoped it would be and brought three pork butts just in case. It takes a lot of charcoal and quite a bit of time, so we always cook plenty when we fire up the beast.

We set it off the porch of the old house and added two small bags of charcoal – a regular Match Light and a bag of Jack Daniels Charcoal with chunks of the whiskey barrel wood mixed in. This is a great way to add a little smokiness to the meat without overpowering it, and it smells so good.

While the charcoal burned down to the white and glowing embers, we prepared the butts. Right before we left the house, I grabbed a few sprigs of rosemary, sage, and chives and put them in a little water in a glass on the window sill. The chives are for later, right now all I need is rosemary and sage finely chopped. Then I added lots of pepper, garlic, salt, paprika, and onion powder. The rub smelled divine, perfect for the pork. We laid a layer of heavy duty tin foil across the top of the cooker rack, and massaged the rub into the pork. Then we shut the lid and watched as the temperature gauge climbed to 300 degrees. It stayed steadily between 300 and 325, sending smoke curls up and aromas out. Meanwhile, I made us a couple of pina coladas and Tony set up lounge chairs by the old house. We put on some feisty bluegrass – not something I usually listen to but perfect for the surroundings – and we laughed and danced through the fields of alfalfa while the cooker worked its magic.

We were celebrating our twenty-seventh anniversary, so dancing seemed appropriate.

About two and a half hours later, we added potatoes wrapped in foil. Then I made a few cornbread muffins and some coleslaw. I also made a vinegar style sauce by taking a few barbecue sauces, spicing them up and cutting the thickness with a little apple cider vinegar. Yum!

(In North Carolina we like vinegar based sauces with our barbecue. In Virginia, I just make it up to suit my tastes from whatever is available mixed with some good vinegar.)

It took about four hours to completely cook and an hour and a half for the potatoes. But the result was well worth it. And we have more than a gallon left to take back home. What we don’t eat today – our son will probably make a large dent in it – can be frozen in quart bags. And it’s easy to thaw and retains its great flavor. On nights when I’m pushed for time, I love knowing that I can have a decent meal put together in a few minutes.

This morning we arose to another misty foggy sky. It wasn’t as dense as yesterday’s, and I actually like the mist rising between the mountain peaks and curling like smoke.

It’s going to be another nice day in Southwest Virginia and we have our dinner already prepared! 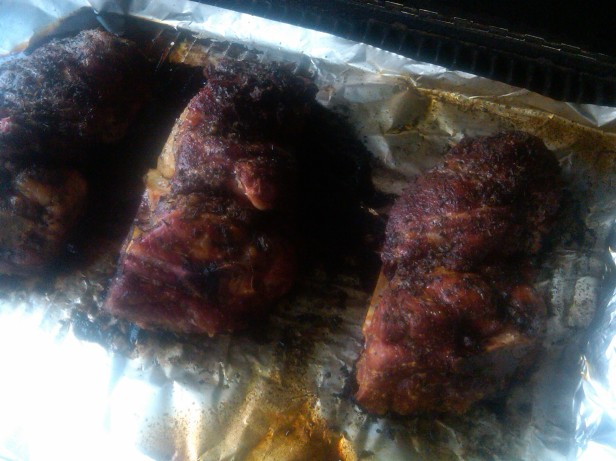