We arrived in Bland, Virginia ahead of the storm Friday night.  But we didn’t escape it.  As we prepared to grill our dinner the rain blew in and we dashed to the back porch to escape its fury.

However, I couldn’t escape the realization that it had been nearly three months since we had managed to get back.  We spent New Year’s Weekend at the cabin, then drained the water lines.  My husband and son had been back to the farm to get some alfalfa hay out of the ‘barn’ for the horses, but no one had been to the cabin.  We didn’t know what to expect.

Would there be mice?

Would there be damage from power outages?

But it was as though we had just returned from a vacation.  No pests, no damage, nothing unwelcome whatsoever.

Had it really been January 2 when we shut the door behind us last?

The cold rain – cold only by our warm North Carolina standards – beckoned us to build a fire.  We have a pit that we can use on the deck and pulled it around to our little back porch haven.

Of course, we immediately began to make a list of all the things that needed to be done – putting another coat of stain on the deck, painting the trimwork, putting up gates at both sets of steps to the front and back porches so we can bring the puppy, etc.  I won’t bore you with the never ending ‘to do’ list, but it often hampers the spirit of getting away if what the mind is focused on are the things that need attention.

That’s one thing the rain is good for.  It delays the chores until a sunnier forecast awaits.

And then we got the weather updates that warned of horrible storms headed our way, and we headed home, cutting our stay a little short.  We waited for a break in the clouds and ran for it.

Apparently, we arrived home in the nick of time.  Dark clouds loomed overhead and we rushed to take care of the animals before the rain poured down.  We weren’t prepared for what did pour from the sky.  It started as rain and then got louder as the lightening and thunder cracked the sky open and hail poured from the heavens.  It beat at the windows and the roof and the vehicles that were outside of the garage.  It bounced on the deck and the sidewalks and I tried to snap a few pictures. 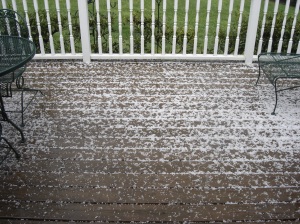 My husband stood at the door and  looked out at the pea sized ice balls with his arms crossed over his chest.

“This is really weird,” he said in a monotone voice.

So I guess you could say our weekend could best be described as hail and high water.  How was yours?

51 thoughts on “Hail and High Water”

#happyvalentinesday❤️ from my #hubby . He’s a keeper! #love #rosesandchocolate
Cheek to cheek with my precious granddaughter. #cherishedmoments